Release the power of your values for authentic happiness

The authors and illustrator

Alan coaches service-sector organisations, internationally and in the UK, to deliver inspiring service for competitive advantage. He is a published author and speaker whose projects have delivered measurable business results across a balanced scorecard and have been recognised with industry awards.

With more than 20 years senior leadership experience in customer-service-based businesses, Alan’s rare mix of extensive strategy, operations, general management and coaching experience enables him to create and implement holistic SERVICEBRAND® strategies for sustainable impact. Alan has applied this approach as a consultant and in senior director roles for global blue-chip organisations as well as smaller entrepreneurial companies. He has enjoyed roles with InterContinental Hotels, Barclays Capital, Compass and Whitbread/Marriott, founding SERVICEBRAND GLOBAL in 2005.

Alan is passionate about the importance of employees at the point of service delivery and their role in delivering remarkable customer experience. He thrives on leading the values-driven transformation of service, culture and behaviour and is an expert facilitator of experiential learning workshops. Alan has created a number of tools including: the SERVICEBRAND approach; Omotenashi, the Practice of Heartfelt Hospitality, a customer-service programme; and the corevaluescore® survey. His first co-authored book, The 31 Practices: Release the Power of Your Organisation’s VALUES… Every Day, received international critical acclaim.

Alan graduated in Hotel & Catering Administration at Surrey University where he has been a visiting lecturer, was a global “train the trainer” for the Marriott International Spirit to Serve programme and attended the Whitbread Leadership Course at London Business School. He is a Past President of the Meetings Industry Association, a fellow of the Institute of Hospitality, a board member of BQF, a founder faculty member of Culture University, a steering group member of the UK Values Alliance and founder of the newly formed Global Values Alliance.

Steven is an actor, author, international executive coach, writer and motivational speaker who has been helping individuals and organisations achieve their performance goals for over twenty years. As an actor Steven trained at the Central School of Speech and Drama in London and has worked in radio drama for BBC Radio 4, as well as appearing in theatre, film and television over many years. His television roles include appearances in some of the UK’s best-known television series.

As a business coach, Steven has helped senior executives from blue chip companies to SMEs in Europe and South America achieve their full potential. He has developed training programmes that that help companies deal with the challenges brought about by organisational change. Much of Steven’s work in business is based on creating a values-based culture. Steven has also created coach-training programmes for the Academy of Coaching and Training (ACT), accredited by the Association for Coaching in the UK.

Steven is one of very few certified Master Trainers of Neuro Linguistic Programming in the world and has a passion for helping people overcome assumed limitations to reach their full potential. He runs certified training courses in Public Speaking, NLP and Coaching across Europe and South America.

John Montgomery is a conceptual artist, whiteboard animator, information product creator, business owner and published illustrator. With over 10 years' experience he works directly with acknowledged experts globally to bring their vision to a wider audience.

John is currently working on several 'Values' based projects for World Values Day plus a new coaching program, "From author to entrepreneur", which helps authors and creatives boost and automate their online income.

John's approach is best described on his own terms, in an illustration: 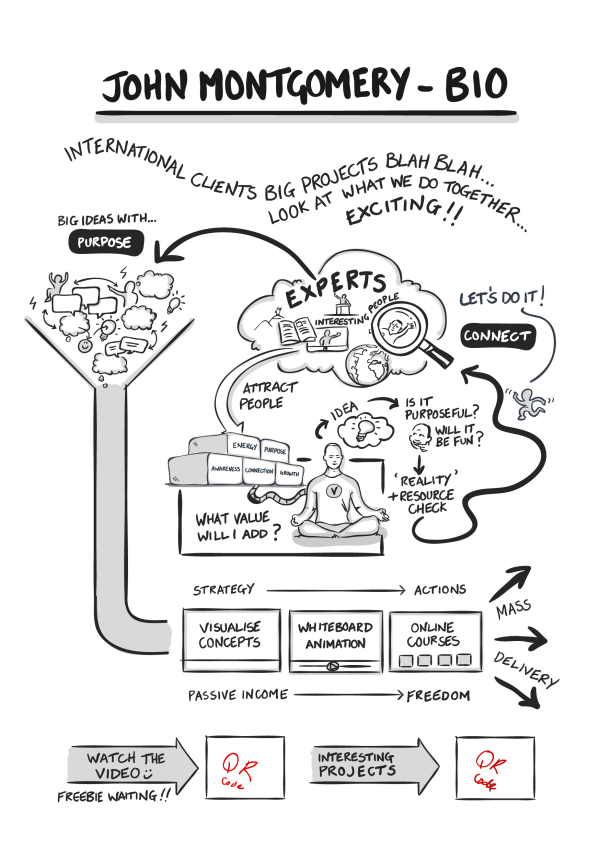 “Definitely a book to help you take action, so best kept close to hand.”

“An excellent practical guide to living your authentic self. Highly recommended.”

“This accessible, practical and action-focused book is a great tool to help us bring our values to life and make a difference in the world.”

“This book helps you think through and deal with the problems and pressures we all face (in the workplace and our personal lives), with approaches that enable you to find personal solutions and a greater sense of wellbeing.”

“The structure, straightforward composition and easy to follow implementation of the methodology in this book are unparalleled in an industry often rife with good intentions and poor execution.”

“Engaging with and applying this book will show you what to do to make greatness a daily habit. It does not promise a quick fix; that’s just not how excellence happens. But if you put my31Practices to work for you, you’ll be well on your way.”

– Jim Kouzes, co-author of the bestselling The Leadership Challenge

Goodreads reviews for My 31 Practices